Ancient Egypt has an enduring fascination, and the newly opened Egyptian golden mummy exhibition at Nanshan Museum proves it. Since the free exhibition opened June 24, the booking has been full every day. Currently the museum is temporarily closed due to the pandemic, so when it reopens July 5, book your visit as soon as possible. 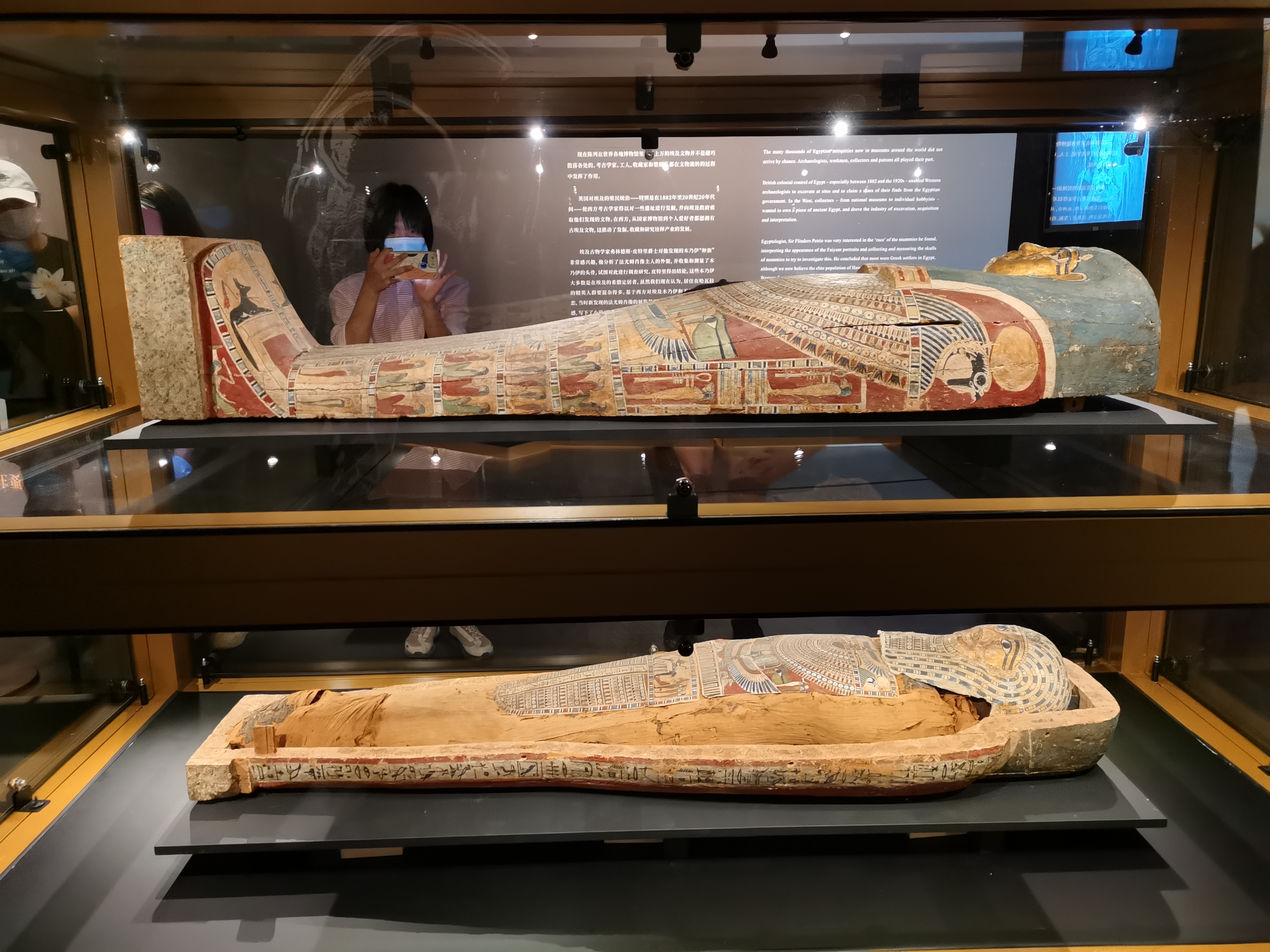 A coffin and a mummy are on display at the exhibition. Photos by Cao Zhen

The magnificent exhibition, titled “The Face of Eternal Life — Egypt and Its Golden Mummies,” is part of Manchester Museum’s grand international touring exhibition, “Golden Mummies of Egypt.” The traveling show plays host to over 100 objects including golden mummies from the U.K. museum’s extensive Egyptology collection. Prior to its arrival in Shenzhen, the exhibition experienced huge success in the United States, Beijing and Shanghai.

The exhibition illustrates both everyday life and beliefs about the afterlife during the Graeco-Roman period (332 B.C.-A.D. 395) when Egypt was ruled by Greek kings and later by the Roman Empire. The majority of the exhibits come from Hawara, an important archaeological site at the southwest of modern Cairo, now called the Faiyum region of Egypt. They were discovered in the 1880s-1910s by British archaeologist William Matthew Flinders Petrie during the British colonial control of Egypt. 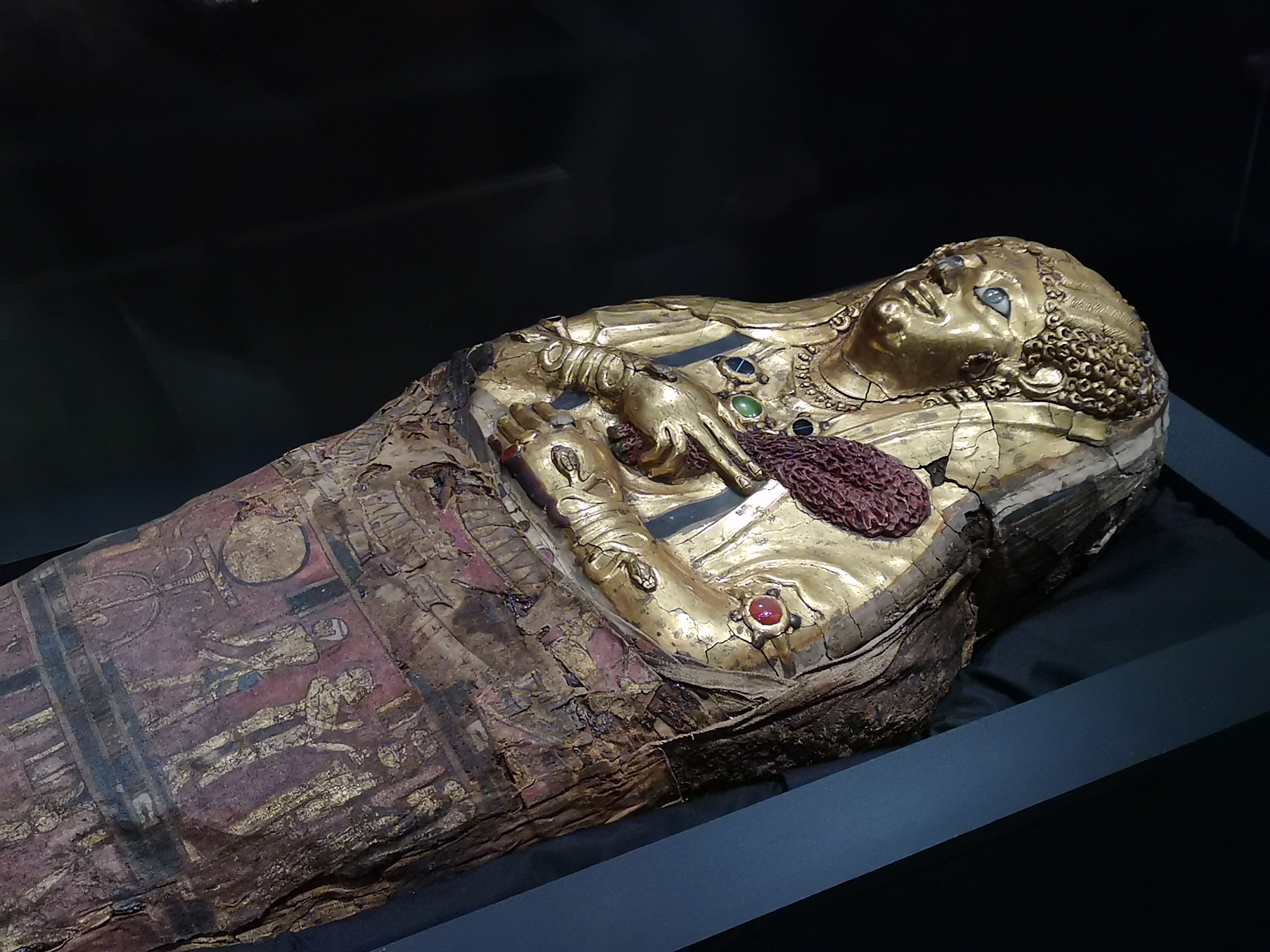 A female golden mummy from the first century is on display at the exhibition at Nanshan Museum.

Golden mummies from around the first century make up the most prominent feature of the exhibition. “The ancient Egyptians believed that after death they could become gods. The use of gold and a lot of objects in the exhibition is not simply a sign of status; it’s also a way of acknowledging the ancient Egyptian mythical belief that the gods themselves had flesh of gold, hair of semi-precious lapis lazuli and bones made of iron,” said Campbell Price, curator of Egypt and Sudan at the Manchester Museum and curator of the “Golden Mummies of Egypt” exhibition.

“This divine appearance was a way of ensuring that after death one would reach the gods and be able to exist in their company among them, as one of them,” he added.

Some female mummies with glittering golden masks at the exhibition have clear wavy curly Roman hairstyles, Egyptian patterns and hieroglyphs on their shrouds, and Greek texts inscribed on the masks. These mummies embody an enchanting integration of ancient Egyptian, Roman and Greek cultures. “Egypt at this time was a rich and diverse society. It was in close connection with other cultures in Africa and in the eastern Mediterranean, so there were Egyptians, Greeks and Romans represented in this multicultural mixing pot of society,” said Price. 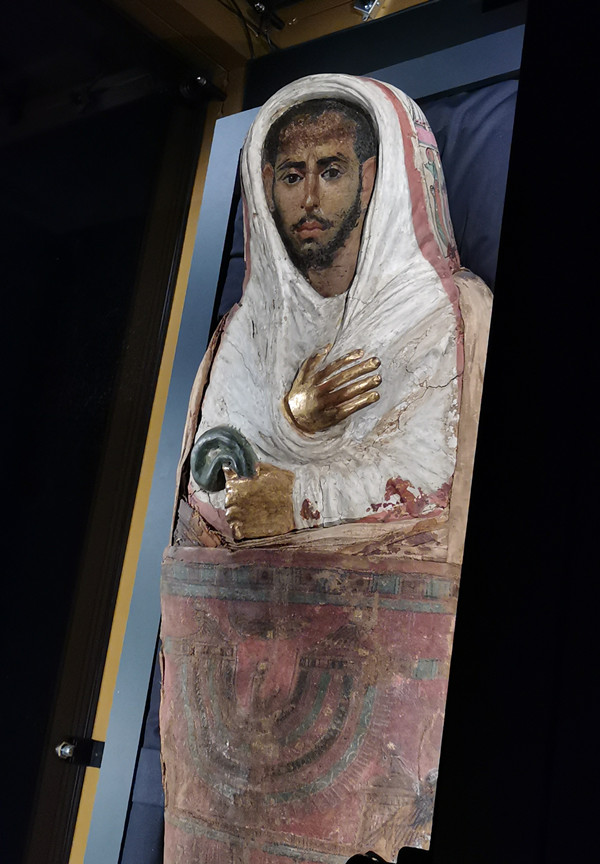 A mummy with his face covered with a portrait.

The exhibition also delves into the art of ancient Egypt through an outstanding collection of mummy masks and painted panel portraits, called the Faiyum Portraits, which were once placed over the faces of mummified bodies. Each portrait was painted with hot wax and paint mixed on a thin wooden board. The technique of making the portraits likely originated in ancient Italy and the portraits look very realistic.

“They depict the deceased men, women and children with lifelike appearances, although that may be misleading as to their real appearance,” said Price. For example, a CT scan shows a male mummy might be chubby before his death but the portrait on his mummy looks delicate. These portraits “are in fact versions of that very classic mummy masks to give the deceased the appearance of a god,” said Price. 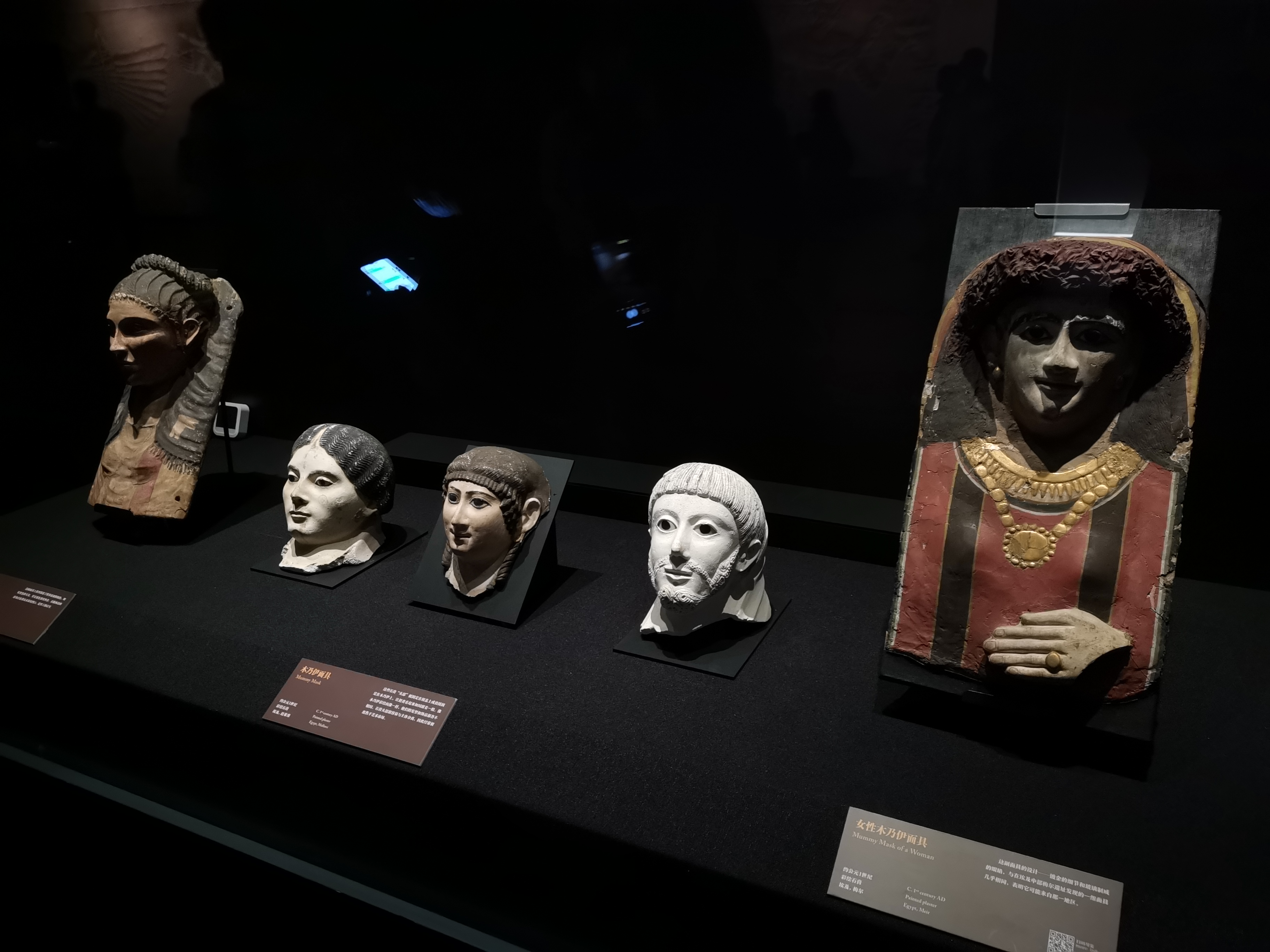 An array of mummy masks.

Price also noted that the exhibition “is not a snapshot of society, nor a cross-section of the ancient Egyptian population.” “What you see in the exhibition are the wealthy people, the top few percent of society who could afford mummification which was very expensive and labor intensive,” he said. 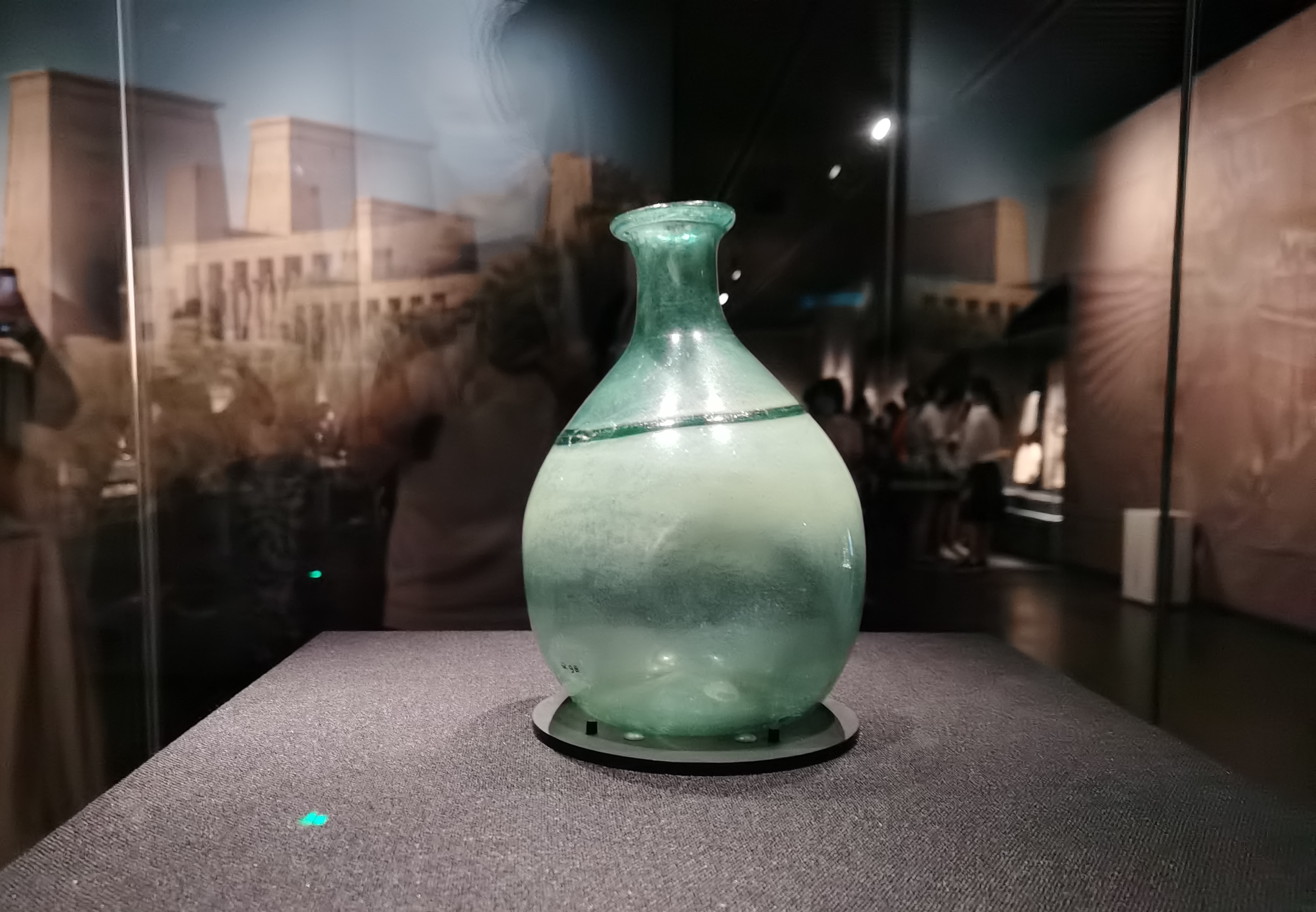 Visitors are of course attracted by the golden mummies and vivid masks and portraits but also by small objects of daily life, such as a convex lens which could be used to target light or magnify text, papyrus documents, jewelries and accessories. 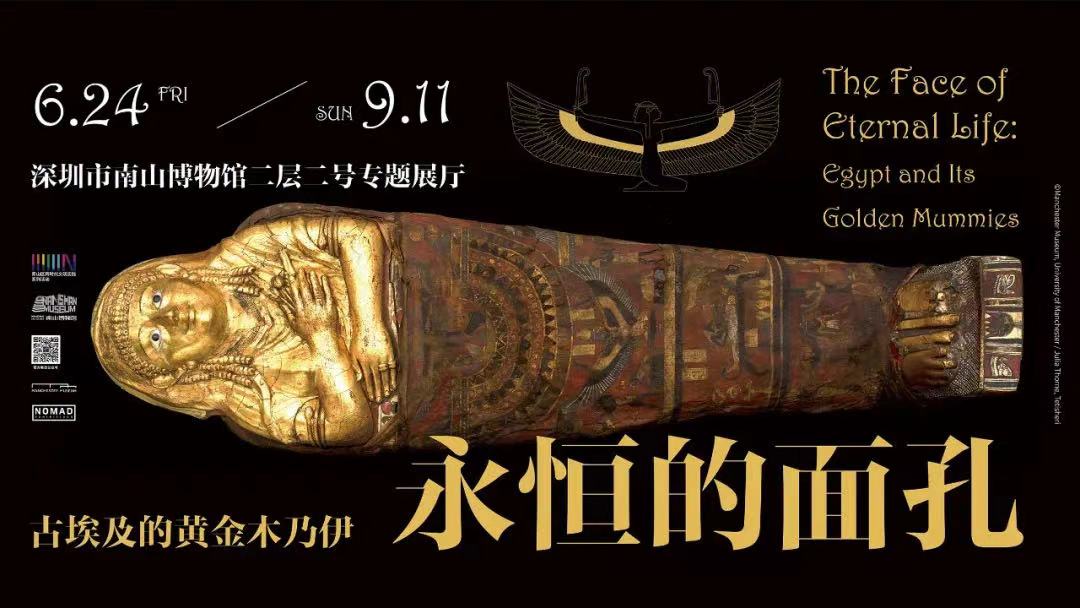